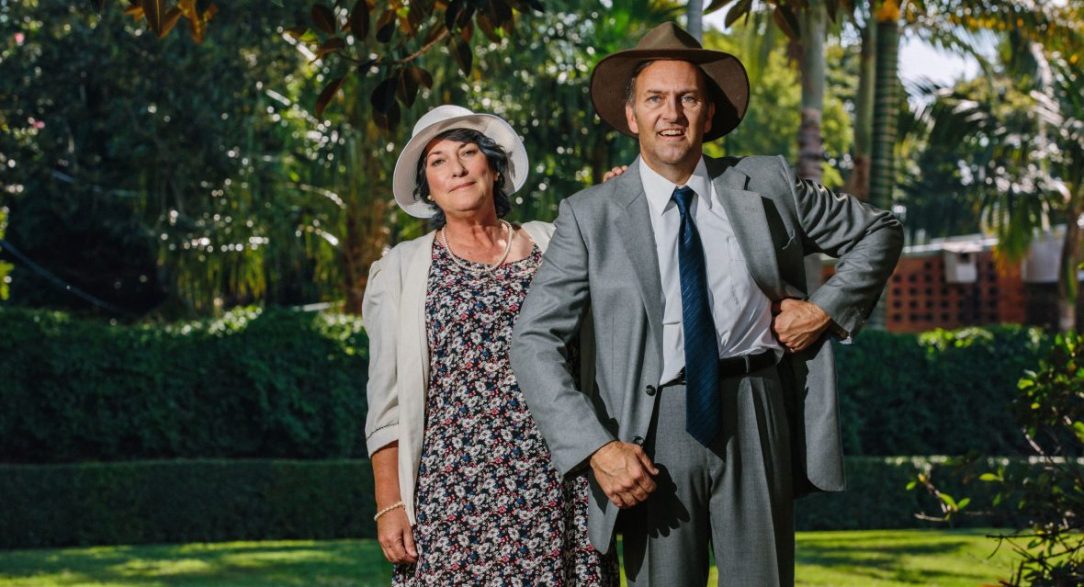 New Australian Musicals? Here They Are!

Since my last article, there has been a lot of discussion about the current state of Australian musical theatre. This discussion is certainly not new, with some debate sparked in early 2015 by John Senczuk’s platform paper ‘The Time is Ripe for The Great Australian Musical’. Recently, I was invited to speak on ABC Radio Sydney Mornings with Wendy Harmer and Radio National Drive with Patricia Karvelas, showing that there may now be a growing public interest in the wider community about Australian musicals. It is also clear that the remainder of 2017 sees the development and premiere of many new Australian Musicals which may herald some progress towards major commercial productions.

Today (7th July) sees the premiere of Joh for P.M. (pictured above), a new musical by Stephen Carleton and Paul Hodge, at the Brisbane Powerhouse. This production is a collaboration between a theatre (Brisbane Powerhouse), a commercial producer (Jute Theatre) and a funded festival (Queensland Music Festival). This collaboration sets up a very interesting and exciting model for a possible way forward for Australian musicals.

Similarly, Muriel’s Wedding – The Musical, premieres in Sydney in November as a collaboration between the Sydney Theatre Company and Global Creatures – the producers of King Kong, Strictly Ballroom and Walking With Dinosaurs.

In August, New Musicals Australia, which is also a funded organisation are collaborating with the Hayes Theatre Company to produce a short season of Melba – A New Musical by Nicholas Christo and Johannes Luebbers starring much loved Australian soprano Emma Matthews.

November sees an embarrassment of riches when it comes to new Australian Musical Theatre on the publicly funded stage. Melbourne Theatre Company are producing Eddie Perfect’s Vivid White (which was originally commissioned as a play but has since added original musical content) and Belvoir are producing Barbara and the Camp Dogs  – an original rock musical by Ursula Yovich and Alana Valentine.

Are funded companies the only existing forum for new Australian Musical Theatre?

Beyond the funded organisations, there is a wealth of new Australian Musical Theatre in performance or development during the remainder of 2017.

Ned: A New Australian Musical with music by Adam Lyon and Book by Anna Lyon and Marc McIntyre based on the life of Ned Kelly will receive a concert performance at the National Theatre Melbourne in July. Errol and Fidel, with a book by Boyd and Guy Anderson and Music by Peter and John Kaldor and Doug Oberhamer will open the New York Musical Festival from July 10. It is based on Boyd Anderson’s novel around true events involving Errol Flynn’s encounters with Fidel Castro.

Other new musicals are being workshopped regularly by independent producers with a view to refining them for commercial production. Between Worlds – A New Musical, with music by Gareth James Hudson and Libretto by Nick Higginbotham traces the final journey of Captain James Cook. It will receive a staged workshop performance in July. Other new musicals with ongoing workshops include a piece about Charles Kingsford Smith, Audrey Hepburn and I Consider Our Assets, and Unrequited, a new musical by Sally Whitwell and Emma Grey.

While trying to be thorough, I have, no doubt missed some productions – please add information in the comments section below!

Home Grown continues to do excellent work including their Grassroots Initiative. This provides development opportunities for writers to hone their craft and develop a piece of work leading towards a reading for a panel of Industry Experts to provide feedback and advice.

Tertiary institutions are also playing their part in the writing, development and performance of new Australian musicals. Monash University recently established a Musical Theatre Artists in Residence Program in partnership with The Pratt Foundation and The Production Company. This will result in a staged production of A Servant of Two Masters by 2017 Artists in Residence, Lucy O’Brien and Andrew Strano in October.

The Arts Academy at Federation University, Ballarat recently premiered The Spirit Level by Dr Rick Chew and Rufus Norris as a part of Ballarat Heritage Weekend.

The Victorian College of the Arts has incorporated the development of new works into the Musical Theatre Curriculum and in February 2018 they are providing an opportunity for Australian writers and composers to present their work to renowned Broadway composer Stephen Schwartz for feedback and mentorship. WAAPA also has a long history of developing Australian musicals.

What about existing Australian Musicals?

There is a growing interest in the heritage of Australian musicals from the past. Paris – A Rock Odyssey by John English is being presented at the Melbourne Recital Centre in July. Lola Montez (a 1958 Australian musical by Peter Stannard, Peter Benjamin and Alan Burke) is currently undergoing workshops by The Follies Company to revamp the show with a view to a professional revival. Only Heaven Knows was recently revived by Luckiest Productions at The Hayes Theatre. A revived interest in Nick Enright’s works has seen the publication of The Nick Enright Songbook, a Songbook Series concert produced by Home Grown as well as productions of Miracle City (Hayes Theatre 2014)  and Summer Rain (New Theatre, 2016)

There is always room, though, for more revivals of Australian musicals as this will heighten public awareness of these works and perhaps even encourage more performances by amateur musical theatre companies and schools, as is becoming more common for Australian plays. These groups must stop seeing Australian works as inferior to Broadway and West End product and take some risks to produce Australian content.

How do we bring these shows to a wider audience?

There is certainly progress in developing original Australian Musical Theatre, but bringing these pieces to a wider public beyond the publicly funded companies or independent producers is still proving difficult.

To move forward, I would suggest that as an industry, we need to:

I will explore these ideas in more detail in my next blog post. In the meantime, I encourage you to spread the word about the amazing work already being done and get out there and see the shows! Commercial producers will start to engage even more when we can show there is a significant general public audience for our own home-grown work.

Please contribute your thoughts and discussion in the comments below!

19 comments on “New Australian Musicals? Here They Are!”